Things have been very quiet in my little place on the internet for the last while.  The kids are older, and aren't super interested in being a focus on here anymore. It's been a couple of years trying to decide where to go.

Today seems like a good time for an update, and to check in and see how you are all doing with the wildness of Covid-19.

I will start by saying that I don't know anyone, personally, that has been diagnosed with it. I do wonder if a few could people in my circle may have had mild cases in January/February, based on some of the symptoms they had. However, that's "before" it was apparently here.


I was a little frustrated when I first heard the kids would be home for 2 weeks after March break. Not only because it is not part of our routine, but also because my mother had just been diagnosed with lung cancer, and was to be undergoing 2 different surgical procedures in that time frame.  With the kids at school, I knew that I could still spend lots of time with her while she was in hospital, and would be able to care for her when she came home.

Having the kids home, was going to throw a wrench into those plans,  Her first surgery went ahead as scheduled, and she had a mediastinoscopy on March 18th. This procedure was to do a biopsy on her lymph nodes.  Since the kids were home for March break, my hubby was able to work from home that day, and I went with her to the surgery, and then spent the night at her place afterwards with her (it was a day surgery)

The lobectomy was scheduled for March 24th. She received a call in the afternoon with her appointment time, and then a few hours later received a call to say it had been postponed. With Covid-19, hospitals were having to cancel and postpone non-life threatening surgeries and procedures.  Her surgical team had to go through their scheduled surgeries, and make the decision on which ones could safely be postponed. Unlucky for us, hers was one of them (although, also good to know that hers was low enough on the urgency scale, that it could SAFELY be delayed).

While the kids were home, our days were filled with youtube, fighting, board games, netflix, fighting, pokemon go, basketball, fighting, baking, fighting....well, you get the picture. Much like most families, I am sure. Once the break was over, and "school" was in session, school work was added into that mix. We also made rock candy (one of Mr. J's school science experiments) We waited, hoping to hear from the hospital with a new date.

The kids found it difficult. They didn't talk about it much, but I know their minds went to my father in law, who passed away last spring from esophageal cancer. It was hard hearing that now, another grandparent had been diagnosed with cancer. The only thing that helped at all, was knowing that with my mom, it was caught early, and it hadn't spread (although we are still waiting to hear about the lymph nodes)

She found out 10 days later it was rescheduled for April the 8th. However, with all the restrictions in place because of Covid-19, she had to go alone. She was unable to have a family member accompany her, or wait, or visit, or anything.

The morning of the surgery, I picked her up at 5am, drove her to the hospital entrance, and had to watch her walk in all alone. My mother. 69 years old, going into hospital all alone to have a cancer surgery. It absolutely broke my heart.  I sat in my car, in tears, as I watched her walk away. Not knowing if that would be the last time I ever saw her. Not having been able to hug her before she went in. Not having actually seen her in person for a good visit, for weeks prior - because of this fu$%ing virus that is going around.  Through my tears, I took this photo on my phone.... not that I wanted this to be the last memory of her, but knowing that it could possibly be. 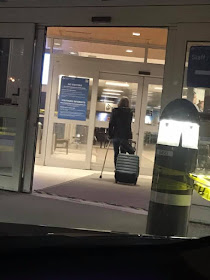 This woman is the strongest, bravest person I know. My father died when we were teenagers. She did one hell of a job raising us, on her own.  She has been a huge support for me, on my journey of motherhood. She is an amazing grandmother, friend, confidante. I had been trying hard for weeks to not think of losing her, but it's really difficult to not let the mind wander that way when dealing with a cancer diagnosis.

The only emotion I can compare having that morning to, was when my newborn was transferred to the local Childrens hospital at 20 hours old. I was stuck where I was with complications, and he was taken by a transport team, because he needed a very high level of care.  The only thing that helped a little, was knowing that my husband could be with him.....but this time, my mom was all alone.

Thankfully, I heard from the surgeon 7 hours later, and the surgery went extremely well. It was incredibly sad that she couldn't have any visitors, but I had prepared her the week before by teaching her how to facetime. I called her on the phone, and then used my cell to facetime her ipad, and was able to walk her through it. That way, at least she could see her friends and family, even if just for a little.

She had to stay in hospital a few days longer than most, but was released on Tuesday. I was so happy picking her up. I wanted to give her a big, giant hug - but unfortunately, that's not possible because of Covid.  I am staying with her for a little while to help her, and keep an eye on things to make sure that nothing goes wrong (and that if it does, someone is with her)

The kids should have been at school during the majority of this, but they are not. My hubby has been wonderful and a great support for me, in working from home, or bringing Mr. K into the office with him if needed (he owns the business, and the amount of staff in the office is minimal, so it's pretty safe for him to be there), so that I can be with my mom.  It's hard though, I miss the three of them and Mr. K sure misses me.  We have a had a few tearful conversations, mostly at night, close to bedtime.

My heart goes out to everyone that is alone right now, and especially to those that are undergoing medical procedures or hospitalized, and having to make do without the support of their loved ones.

When all of these restrictions are removed, I can't wait to be able to hug my mom. Get together with the rest of my family and friends....and have our pool installed! (we were set for a June 8th dig date, but that has been delayed with the essential businesses allowed to be operating).

I certainly hope that all of you are well. Please leave me a note to let me know, and I would love to hear what you are most excited for when restrictions are lifted.