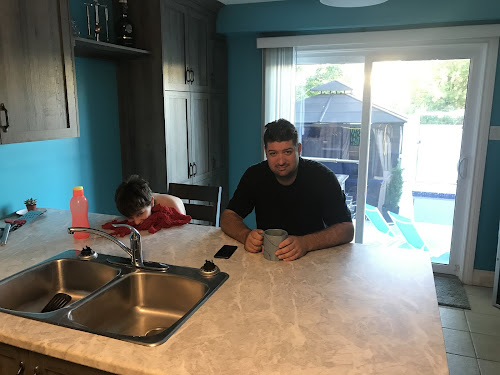 This month, I will be turning 40. Hubby and I discussed it last year, and he was going to plan a big pool party to celebrate. Then, covid happened. It messed with all those plans, the big shindig will be for my 41st instead.  We will just be having 1 or 2 friends over for a socially distant bbq and swim.

I wasn't really sure what we would do to mark this big birthday, and then in early June, my dishwasher broke. We had just finished cleaning out the backyard in preparation for the pool.  When it broke (somehow it ended up with a crack in the base of the dishwasher - it almost looks as if something burned into it), I came up with a plan.  When we bought this dishwasher, the technician and hubby had to break apart the old one to get it out. Then, they had to break the counter top to get the new one in. When the original owners put in ceramic tile, they didn't lift up the cabinetry, they just added a subfloor and tiled. Which meant the tile was about 1 inch above the base of the cabinets and dishwasher.

Since the counter was already broken, and my cupboards were missing a couple of doors, and one drawer was broken (Mr. J used to step on the handle to climb onto the counter), I decided it was time for a new kitchen.

Hubby and I have been discussing it for a while, and we had 3 scenarios in mind. The first was the cheapest, just buying new doors and replacing the counter.  The 2nd was all new cabinets/doors, counter - and extending the counter past the sink to make an island/breakfast bar. The 3rd was completely gutting the kitchen (including the floor) and changing the layout.  We like to call option 3 the "dream kitchen". Unfortunately, the dream kitchen was not in my budget, but we were able to go with a combo of #2 and #3. We hired someone to custom build all the cabinets (and he had a couple of design ideas for us which gave us a bit of a change) and we also changed the place of the pantry. It used to be directly across from the counter, which didn't give a lot of room to walk by, we switched the location to the opposite wall, next to our patio door.

I am so happy we did it, although it was an incredibly disruptive renovation.  The kitchen really is the heart of our home. I spend a lot of time in it, and not having a sink for 2 weeks was rough. I washed all the dishes in the bathtub.

The cabinets only took 2 days to get in, but then we had to have them measured for the counter, and that took a week before we could get it installed. We were lucky, and managed to have our plumber booked for the same day as the counter, so my kitchen is now complete.

If we ever do go for the "dream kitchen", I will pay someone to do the demo, and I will also go to a hotel for a week or 10 days to cut down on the disruption of not having a functioning kitchen.  It was nice that it was during the summer, so hubby was able to bbq many of the nights, 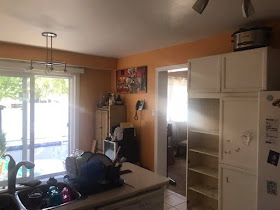 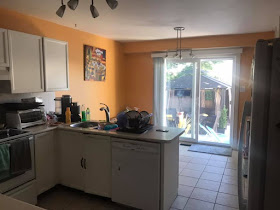 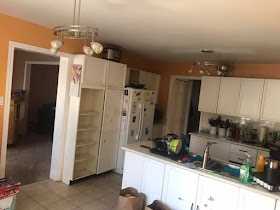 DEMO
We all helped with the demolition. Hubby did the majority of the tear down, while I carried all the old stuff out to the garage.  The kids were very excited to get to help destroy stuff, and it didn't take any convincing to get them involved. 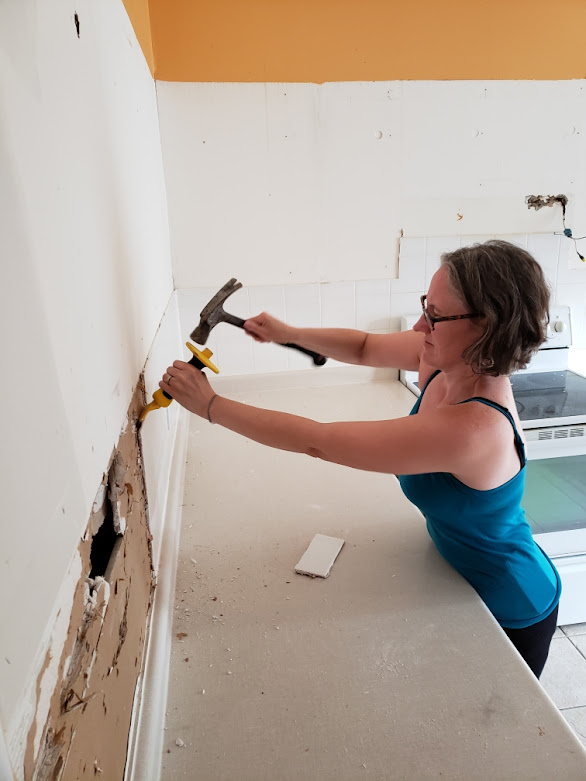 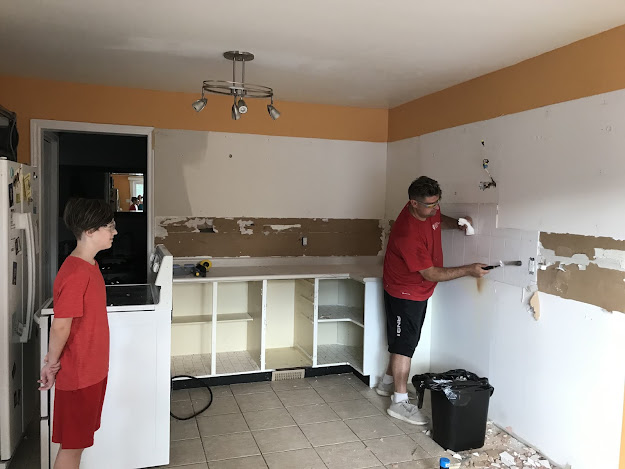 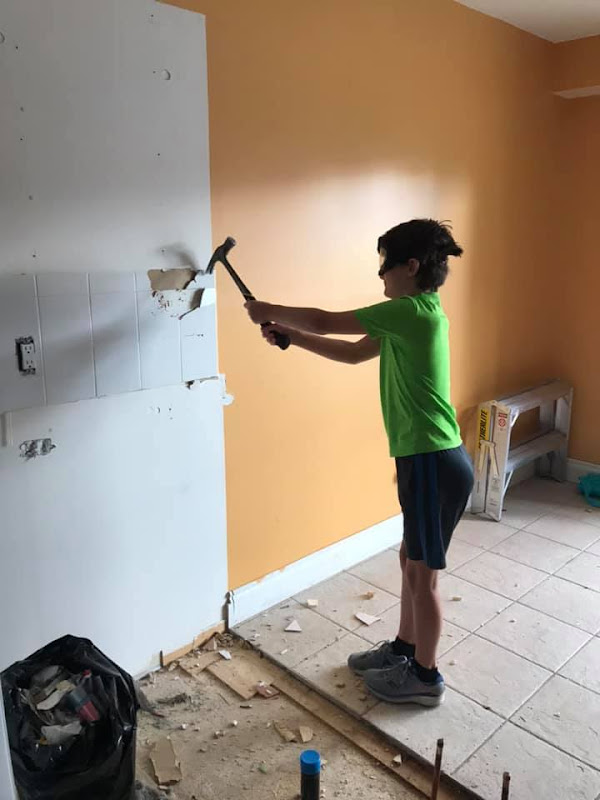 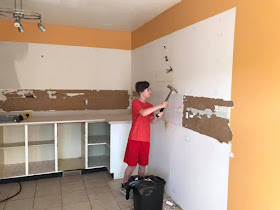 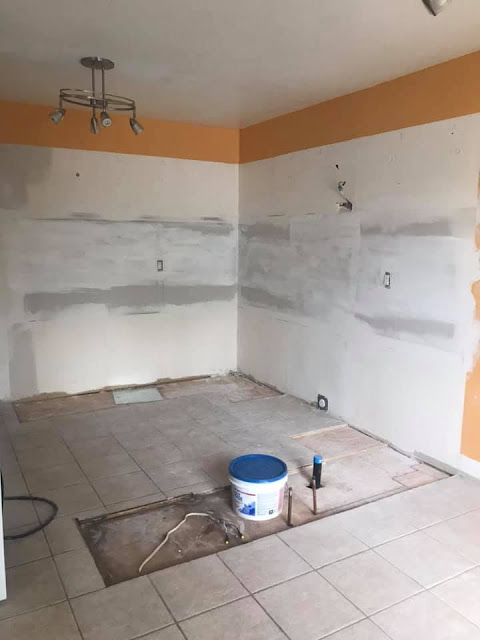 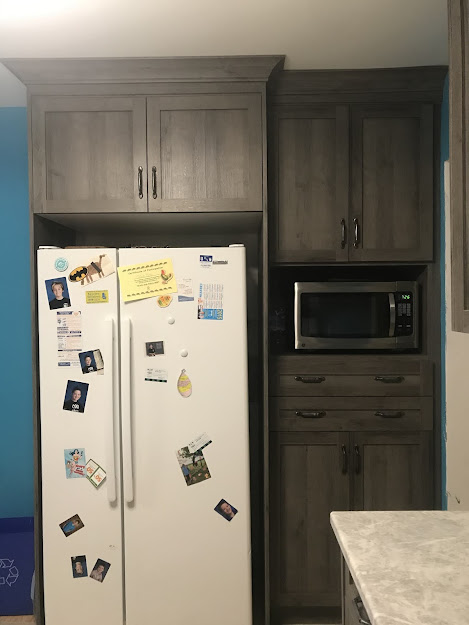 There was a counter beside the fridge, and the cupboards weren't very deep.  He brought the cupboards over the fridge out and made them deeper, as well as added vertical slats for my baking pans. Then he made a shelf for the microwave, added in 2 drawers and brought the upper cabinets out to be the same depth as the lower ones.  This is actually my favourite part of the "new kitchen"....although I do really love the island. 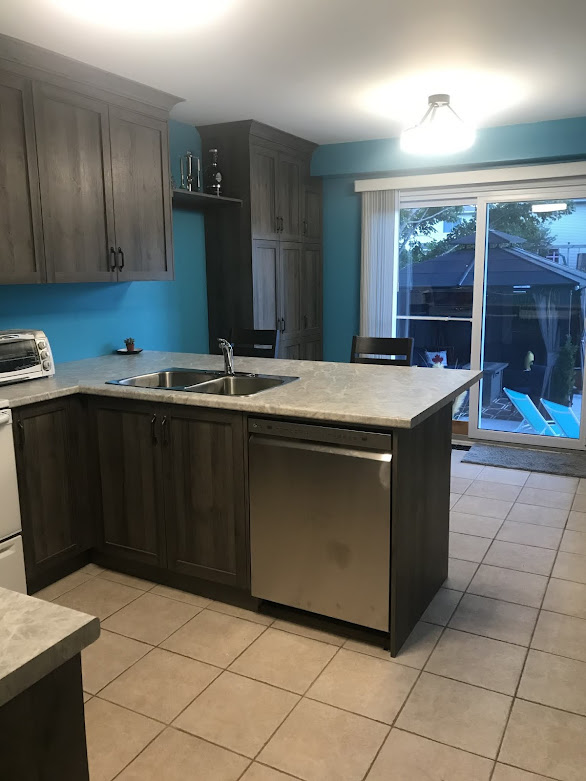 We extended the counter by the sink to have an island/breakfast bar. Added an extra cupboard on the wall, and moved the pantry (also making it larger than it was).  He built us a display shelf as well (which we needed - the space was missing something, and the shelf fills it well) 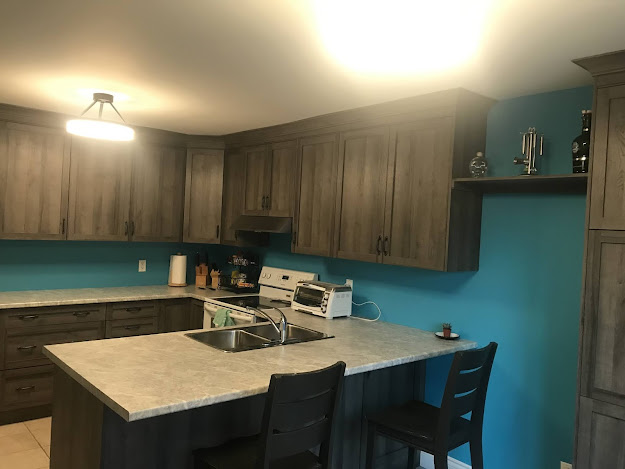 We still haven't found the right chairs/stools - but these 2 were being given away on my local buy nothing site, and they work perfectly for now until we find the ones we want. The new pantry. It is 10 inches wider than the old one, and 5 inches deeper. It actually allowed us to remove the pine unit we had in the opposite corner before, so has opened up the other space.
As the rest of our appliances die, we will be replacing them with stainless steel to match the colours in the kitchen.
It was a very busy summer in terms of renovations. The backyard was a much bigger reno, but it wasn't nearly as disruptive.  I am very glad that we went ahead with it (and we really managed to luck in that our cabinet guy was able to book us in August, it was pretty quick turn around from making the decision to having it installed.)  Now we will be moving onto changing Mr. J's room. New paint, new bed, new closet.
Ashley P. at 7:59 AM
Share