This past weekend I did something for the first time. Ever. I went camping. Yep, 38 years old and never been camping before.

Mr. K joined Beavers last year, and did some camping with them, and more this year with Cubs. It's an activity that he REALLY seems to enjoy.  I decided that since it is a passion of his, I should probably share it with him at some point.


His scout leaders planned a "family camp" night for June 22nd at Foley Mountain. The camp ground was about 75 minutes from us, and had a building with flush toilets (I will admit, the flush toilets were the only reason I agreed to go). 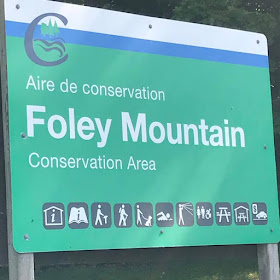 The really nice thing about family camp, was that all I needed to bring was a tent, and clothes etc.  We paid the scouting group, and then they took care of the rental and buying all the food and what not.

We had a tent already (Mr. K went through a phase of sleeping in a tent - our living room consisted of a tent for an entire summer one year). We had sleeping mats and sleeping bags (since he has been camping before).

Our first stop was Tim Hortons - I think every Canadian road trip has a Tim's pit stop in it somewhere! Once we were on the road, we listened to music and chatted. When we arrived at the site, we both headed to the bathrooms - and Mr. K found a snake. It was approximately 1 meter long, and slithering up the ramp he had to come down from the bathroom. He ended up hopping the railing instead.  The kids nicknamed the snake big Jim. We saw him a few more times, but then I think the noise from all of us scared him off. (If I am being 100% completely honest, I wanted to leave when we saw the snake.....but when I saw how happy Mr. K was being out there with his friends and the thought of camping with his mama, I just couldn't make him leave)

Once we found out where we would be sleeping, MR. K and I got to work on setting up the tent (we discovered after that we had forgotten to sweep the area for pinecones....mental note for next time). The tent we have is a pop up one, so it's super simple to get together.  Once it was up, he put the pegs into the ground so the tent would stay put.  We then set up our sleeping bags and pillows, and he brought out his pikachu and beanie boo as well.